It’s important to organize the community and pressure the NYPD to act. This is why we copwatch. We see officers repeating the same behavior with no discipline.

UPDATE: Since publishing this project in June 2018, El Grito de Sunset Park changed their name to El Grito to reflect the expansion of their work in police precincts across New York City. In 2021, El Grito helped launch a new initiative called COPWATCH MEDIA which “is a community-based journalism project publishing articles and multimedia about law enforcement’s effects on hyper-policed Black, Latinx and non-white communities. COPWATCH.MEDIA also serves as a media watchdog for local and national news reporting that is deferential to law enforcement (copaganda) and will host a database that catalogues police and police misconduct.”

El Grito also collaborates with groups like the Sunset Park Relief Coalition and the End Broken Windows Coalition, which is working to end “zero tolerance policing” in New York City.

Inspired by many gritos (translates to “shouts” or “cries” in English) and their history of resistance, El Grito provides a platform on which to express and document the experiences of marginalized communities by encouraging civic engagement to protect human rights. Learn more. 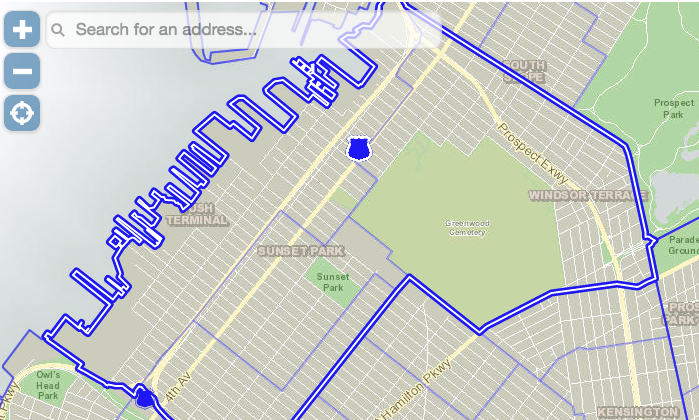 To better understand the culture and institutional practices of the 72nd precinct in Sunset Park, you need look no further than the tragic events of August 4, 2001.

In the early morning, after a drinking binge that started in the 72nd Precinct’s parking lot with 10 other officers and ended at a reportedly “off-limits” strip club, Officer Joseph Gray got behind the wheel of a burgundy Ford Windstar and ran a red light killing a four-year-old boy, his pregnant mother and the boy’s aunt. Gray was convicted of second degree manslaughter and spent over a decade in jail.

The event became a high profile scandal for the NYPD. While Gray was convicted and served time, five officers were suspended (later returning to duty), and five were transferred — including the precinct’s commanding officer, executive officer and integrity control officer. The only dismissals were two officers who were on probation at the time of the incident.

The New York Times cited the incident as an example of the blue wall of silence, “the tradition of the police lying or looking the other way to protect their own”, because of the attempts of some of Gray’s colleagues to get him off. The Times compared the incident to the testimony of Frank Serpico, the first officer in NYPD history to report on widespread corruption.

According to Prof. Jerome Skolnick at New York University Law School, “The blue wall is still an issue, and it’s not surprising that sort of behavior would take place around drinking, which is seen as a kind of a venial sin. It is so widespread that cops are most likely to cover up for one another on that issue.”

It is vital that the city create transparent storage systems where members of the public can access public footage without unnecessary red tape, expense, and interference. As easy as it is for the police department to access and publicize footage when they want to catch a suspect, it should be just as easy for the public to hold the police accountable. The public's right access data should be independent from NYPD or other city agencies.

Unfortunately, the NYPD continues to rack up violent and tragic encounters with impunity in the communities they’ve been charged with protecting.

Many of these incidents are being filmed by bystanders and copwatchers, a decentralized network of groups and individuals that document police activity in their communities. After choking Eric Garner to death in 2014, NYPD officer Daniel Pantaleo steadily increased his earnings — including a sharp jump in overtime pay. Ramsey Orta, the man who filmed Garner’s death, was harassed online and offline after releasing the video. He was jailed later on unrelated charges, making him the only person at the scene of Garner’s killing who served jail time.

Calls from the community and elected officials to fire officers like Pantaleo who have a history of violent encounters were called “unamerican” by Police Benevolent Association (PBA) President Patrick J. Lynch. The continued inflammatory and rhetorical responses to police abuse from the PBA has made for a union that is as much spin doctor as labor advocate.

Videos taken by civilians offer the ability to identify and monitor officers who use excessive force.  Police accountability groups like the End Broken Windows Coalition are advocating for legislation to help protect civilian’s right to film law enforcement and to ensure greater transparency around footage captured by NYPD or city cameras.

Want to take action? Find tips and guidance on filming the police here.

Under a law passed in Colorado, police officers who interfere with lawful copwatching may be fined $15,000 in civil actions, in which immunity defenses do not apply. CPU says that NYC should likewise mandate strict penalties against officers who interfere with the public's right to film the police, subjecting those officers to civil liability for constitutional violations and destruction of property.