(00:27-00:36) Ciardiello enters the frame just a young man is arrested and put in the police van. Appears to be pushing crowd back as they protest the arrest of the young man.

(01:15) Ciardiello can be seen shouting and aggressively pushing the crowd backwards throughout the majority of the video.

(01:46) Ciardiello appears to push over a delivery bicycle.

Vincent Ciardiello was one of the officers involved in aggressive NYPD crowd control tactics during the Sunset Park Puerto Rican Day parade. Ciardiello is named as a defendant in a civil lawsuit brought by Enrique Del Rosario, a 17-year-old who was violently arrested as he was filming the police during the parade.

Although not clearly shown in the video, the lawsuit states that Officers Ciardiello and several other officers slammed Del Rosario into the security gate of a locked store and then punched, kicked and hit Del Rosario with their batons.

Following the arrest of Del Rosario, a number of officers, including Ciardiello, were involved in aggressively pushing back a crowd of civilians and an organized group of copwatchers. Ciardiello can be seen on video pushing over a delivery bike and shouting and waving his baton at the crowd.

According to the lawsuit, Del Rosario was charged with attempted assault in the second and third degree, attempted grand larceny and disorderly conduct. Del Rosario was also held in custody for approximately 30 hours before being arraigned on felony charges. His parents were not notified he was in custody, despite the fact that he was a minor at the time. The charges were dropped when officers’ witness testimony was discredited and eyewitness video contradicted officers’ statements.

Del Rosario sued the city for compensation, naming several officers, including Vincent Ciardiello, along with five John Doe officers. Several other youth were arrested and the charges were later dropped.

According to a Vice News article, Del Rosario was unable to recover his camera, and the footage from the NYPD has not surfaced. According to Think Progress, neither Del Rosario’s lawyer Rebecca Heinegg, nor Dennis Flores of El Grito de Sunset Park were able to obtain NYPD video footage of the encounter.

The lawsuit cites at least 15 other cases filed against the city by people who were arrested for filming or documenting the NYPD. The suit was eventually settled for $40,000. 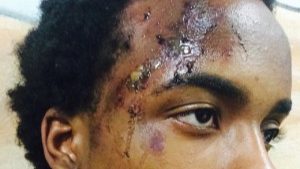 Enrique Del Rosario, a 17-year-old who was violently arrested as he was filming the police during the parade. Photo: El Grito de Sunset Park

Brooklyn prosecutors have dismissed charges against a Sunset Park teenager for assaulting a cop this past summer after a video surfaced earlier this year proving his innocence.

Another Sunset Park resident is vindicated after prosecutors dropped charges that video of the incident proved were trumped-up.

A Sunset Park teen who was beaten by police and then falsely accused of being the aggressor is suing the city and several police officers.

Throughout the years, we have video documented dozens of incidents of police misconduct within the 72nd precinct’s jurisdiction. Our footage has helped exonerate some of those who have been unjustly criminalized and subjected to police brutality. Despite our documented evidence of police abuse, the officers who perpetrated these crimes with excessive force have not been held fully accountable for their actions.